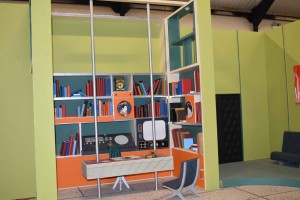 By August, 3,300 people had backed the project pledging over £218,000 – enabling the production team to take on not one new episode, but three.

In December the filming concluded and on January 4th 2016, all of the new episodes were screened at the ICA in London – the first new Thunderbirds episodes made in Supermarionation in 50 years.

In this special programme Phil Moakes and Maggie Gregory go behind the scenes and meet the crew, producers and fans to find out how Thunderbirds 1965 came about and how it was made. The show also includes exclusive pre-release clips from the new episodes.

Introducing Thunderbirds 1965 will be broadcast on FromeFM 96.6FM and online on Sunday 6th March and Sunday 13th March at 2pm but if you can’t wait you can already listen online at http://frome.fm/programmes/talk-features/introducing-thunderbirds-1965

Our thanks to producers – Stephen La Rivierre, Andrew T Smith and Justin T Lee, to sound editor Mark Ayres and Pyrotechnician Malcolm Smith for their contributions and help.