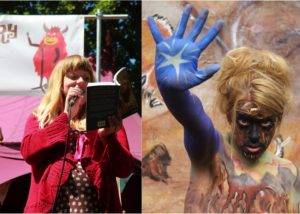 Sunday April 3rd from 6-7pm Join  ‘ForgottenBee’ for ‘From the Hive’ (by tuning into 96.6FM or online www.frome.fm/from-the-hive

Bee says “I am delighed to have award winning and performance poet Liv Torc as my special guest on ‘From the Hive’ this month ahead of her hosting a Bruton Festival of Arts Event I am organising ‘Bruton Poetry Platform’ – At the Chapel – Bruton on 28th May 2016 and her performance alongside Hollie McNish at The Roundhouse in London in a gig entitled ‘Mum’s the Word’, on June 3rd.”‘Liv Torc is a razor blade skating performance poet and comedian, who plunges the vast caverns and dormant volcanoes of the human condition, armed with a box of matches and a sense of lyrical wonder’.Liv is an experienced and popular performer, compere and workshop leader, Liv was the South West winner of the last National Radio 4 Poetry Slam, the second ever Bard of Exeter and the poet in residence at Exeter’s first ever Poetry Festival. She is co-host of The Hip Yak Poetry Shack, performs nationally and internationally and runs a successful spoken word stage at WOMAD festival. Her first published collection ‘Show Me Life’ was released last June by Burning Eye Books.

Liv will also be appearing at Buddhafield and WOMAD Festivals, along with taking the role of Lead Artist in a ‘poetry on prescription’ project based in Yeovil, aimed at supporting adults with mental health issues through the medium of poetry.