Some of the FromeFM volunteers

FromeFM is a Frome based non-profit community radio station run by Frome Community Productions CIC. Produced by over 100 members, it broadcasts new programmes every month online and on 96.6FM. FromeFM provides niche music programmes; Frome focussed debates and reportage; sustained support for and coverage of the work of community groups; and radio for children.

View on a map

Please visit the contact us page for details on how to get in touch.

We are supported by local sponsors and through donations.  You can support us by making a donation to: 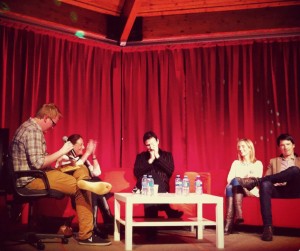 FromeFM started life as a small project back in 2005 at Frome Community College. It was resurrected in 2007 by Phil Moakes who, with the help of a small team of volunteers, produced and created varied radio programmes both online and on FM with a restricted service licence and broadcast from the attic of the Cheese and Grain.

In May 2008 FromeFM was established by Frome Community Productions CIC and moved into brand new premises at The Old Fire Station where the station has undergone significant upgrades since, all with the help of fundraisers and sponsors alike.

In September 2009 FromeFM launched a streaming service for mobile phones to enable listeners to tune in whilst on the move.

On May 21st 2012 Frome FM was commissioned by Ofcom to broadcast on 96.6 FM and the station launched as an FM service on June 16th 2012 from a transmitter placed on top of the Memorial Theatre a short distance away. A launch event was attended by many local celebrities including actor Mark McGann, folk singer Cara Dillon and musician Sam Lakeman.

Between November 2016 and March 2017 FromeFM broadcasted from temporary accommodation at The Old Police Station before moving to its permanent new home at the new Frome Town Hall.

Social gain and other objectives 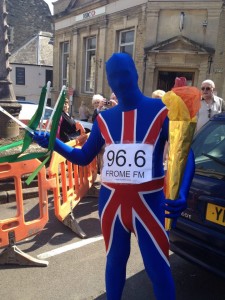 One of the FromeFM presenters promoting the station during the Olympic Torch Relay in 2012. Can you guess who it is?

FromeFM covers extensively the Frome Festival events each year with daily breakfast shows instead of just the weekends and special editions of regular shows. You can listen to our festival archives here.

In 2012 Pencil Studios produced new branding including logo and colour scheme. A short video was produced to show off this new design and the new website also shares the same feel.